RUN AS ONE SINGAPORE – INTERVIEW WITH GUILLAUME RONDY

How does it feel to be back racing?

I have participated in a few virtual run events over the past few months, so this was race #3 and 4 for me. The 12.9km was the longest one I did since February though, and that brought the traditional pre-race butterflies which I was happy to feel! Racing is why I train and it is always a great feeling, whether it is a mass event or an ITT (individual time trial). 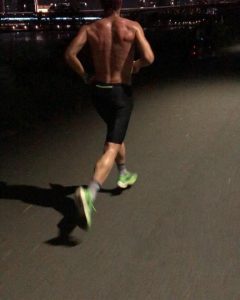 Did you push yourself as much as you would have in a mass participation race?

I certainly tried, but I still believe mass participation races push you more – in particular at the start. That being said, the idea to have your selected competitors’ times was brilliant to keep you going hard.

Was your decision to run the 12.9km on the last day of the 10-day period a strategic one so that you could see the time you needed to beat?

It looks that way but I wasn’t this strategic! I decided to run both events so wanted to maximize the recovery time in between the 2. That’s why I ran the 5.6km on Monday morning and the 12.9km on Sunday evening. It did turn out to be a great strategy though as the leading times were improved over the last 24-36 hours I believe!

Did you use the “select your competitors” feature so that you could compare your pace to those of the race leaders?

Absolutely! I had a specific target pace in mind for the 12.9km which I knew would be faster than the then race leader, but having this feature was very useful to keep me committed.

I ran the 5.6k in the early days of the race so did not make use of the feature for that event.

And/or did you choose a “target time” to pace yourself to a winning time?

I did indeed, for both races. This was actually a very nice additional oral cue to my watch to confirm that my pacing was at least as good as the target I had set myself.

What was your favorite feature of the app?

It was simple to use, and both of the above features made it feel more like a mass participation race than an individual time trial.

Why did you choose Run As One Singapore?

The main attraction was the ability to race people on the same course: this means no cheating is possible. In this virtual racing world, I have seen it too often recently and welcome that change.

How have you stayed motivated during this period where there hasn’t been any competitive events happening?

I was very lucky to have a new baby girl in April, so this shifted a lot of my focus away from racing for a while! I also quickly set new “race” goals for myself to keep me motivated when training, such as running a 5k TT once a month. This has paid off with a new 10k PB, 3 race wins and 1 second place in 4 “virtual” races.

Would you do an event such as Run As One Singapore again?

Absolutely! Please bring us some more!